I’m blogging to you from my tablet and it is not easy. I was supposed to have a new PC by now - well, not completely new. My monitor’s still the same and my hard drives are still the same, but everything else – that will all be new. None of this is by choice. Last weekend, my beloved computer decided to commit suicide. It’s been slowly becoming problematic anyway, so it will be nice having a new computer, but man is my pocket sad about the unexpected expense. Especially since I spent a great deal of time this month planning and preparing for the Baby Sprinkle I’m throwing my sister in the beginning of September (money and I aren’t friends right now, clearly). What’s worse is that the new computer arrived this week, already defective. There is some sort of complete revolt going on against me where technology is concerned (seriously, my computer’s not the only malfunctioning product around me this week – I’m going nuts).

Anyway, July! Talk about passing fast. I don’t think I’ve ever been as busy in July as I was this year and to tell you the truth it was kind of annoying. And it definitely hurt my productivity elsewhere.

I only managed to read two books this month: My Life Next Door by Huntley Fitzpatrick and Definitely Dead (Sookie Stackhouse, Book 6) by Charlaine Harris. I didn’t really have time for reading and when I did have time I tried to write. There’s no sense in photographing them together since that’s such a measly number, but one of them is worth talking about.

My Life Next Door was surprisingly good. I’d bought it on a whim, just because I was on a book buying binge and I thought it’d be a fluffy summer read. Like the main character, I was immediately drawn to the large, loving family next door. The story is also set near the water, where boat people come and go. As a kid, being out on the boat and visiting various marinas was the only thing I liked about summer. This aspect spawned a lot of good memories for me. The love story is perfectly sweet. But in addition to this is a political campaign staring the MC’s mom. And appalling, unexpected twists go down. And long story short, I found myself sobbing ugly, snotty tears for a good 40 pages towards the end as the author ripped me from this perfectly lovely summer story and stuck me in hell with the MC. There aren’t too many books that move me to this level of emotion, especially when I don’t see it coming. Really, this was one hell of a read and I’m eager to see what else Huntley Fitzpatrick has up her sleeve.

As for writing this month, well as you might remember I was participating in a private session of Grapemo over on FB. There are about 19 of us there, though not everyone is actually active. Still, the interaction on FB was far superior to the normal Grapemo and I’m positive it helped drive me to work harder. While I didn’t write as much as I’d hoped, I did write (which is better than the nothing I reported last month) and I shared a snippet from Dreamsters twice a week all month long. It’s the most I’ve shared of my book ever. And the members ate it up. It shocked me how receptive they were to the story, but was more encouraging than I could have thought it’d be. There are plans to leave the board open into August and I’m grateful for it. The accountability is extra important in the summer for me, when it’s so much easier to just forget about my book altogether until fall arrives. I doubt I’ll pump out some huge number next month, but I am confident I’ll write something and that’s fine with me.

So, nothing all that exciting to report for July. I’d say the coolest thing that happened in July was that I dyed my hair peacock colors. I’m rather in-love with it. 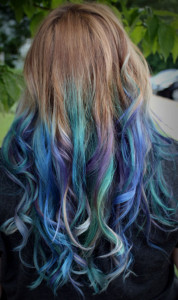 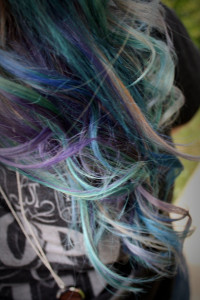 How was your July? Anything fun to report?
Tags: colored hair, in review, july in review, life, reading, writing
Subscribe